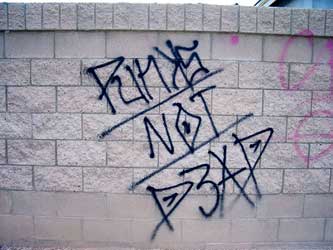 While the number of reported incidents of graffiti has risen significantly in Phoenix in 2017 compared to previous years, the percentage of gang-affiliated graffiti has decreased to as low as 1% in the months of April and May (compared to 6% and 8% respectively in 2016). Taggers have made up the majority of vandals whose works have been reported to Waste Management, accounting for between 40 and 76% of cases in the first five months of the year. If trends reported over the last two years are to be repeated, Waste Management and Phoenix Graffiti Busters in both Phoenix and Tucson can expect to see a rise in reported graffiti over the summer months, with a noticeable drop in cases when cooler temperatures return and the 2017-2018 school year begins.

The North Scottsdale neighborhood is once again the the front runner in terms of number of cases reported to Tucson Graffiti Busters, racking up 10 times more incidents in May alone than the runner up, North 202 and 101 Loop. Rounding out the top five neighborhoods with reported graffiti incidents are Mesa, University of Phoenix, and ASU.

While cities around the world such as New York City, Beijing, and Adelaide have embraced local graffiti artists and have gone so far as to implement government-sponsored programs to encourage urban artistic expression, the city of Phoenix has a very strict no-tolerance policy. Reviewing the past ten years’ worth of data collected by the city of Phoenix shows that the city’s plan to wipe out graffiti – particularly gang-related graffiti – is working. Recorded incidents of graffiti are down nearly 60% since 2007. In 2008, when tracking became more precise, 11% of all cases reported were gang-related, compared to just 3% in the first half of 2017.

Citizens are encouraged to report any suspicious behavior by calling 911, and to attempt to prevent graffiti by taking such measures as questioning any teenager seen with spray paint, instilling a sense of community pride in children and neighbors, and protecting their property with fences, murals, and landscaping. Once the city has received a graffiti removal service incident report, it becomes to responsibility of the owner of the affected home or business to remove the graffiti within seven days. Failure to do so means representatives from the city removing the graffiti and passing the bill along to the property owner.

For more information or to report graffiti, please visit our graffiti blog.