What is Soda Blasting

Soda (sodium bicarbonate) is a gentler medium than glass beads or sand, and it is considerably milder on delicate parts like carburetors and aluminum castings. While removing light rust from softer materials is more straightforward, it is less effective on severe rust. For oxidized steel and iron, sand or beads have historically been the chosen blasting medium. However, soda is excellent for cleaning scale, dirt, and chemical stains such as charcoal, paint, fuel, and unfortunate coatings.

Blasting is the technique of treating a surface by hurling high-velocity particles at it. It is a quick and straightforward technique to get rid of metal, plastic foreign objects, or rubber. Furthermore, blasting occurs in confined locations such as blasting chambers or cabinets or on open sites like buildings, tanks, bridges, mobile factories, or boats. Common hazards include hazardous chemicals, bags of dust, and risks associated with the use of equipment.

Sandblasting goods may be done in a variety of methods, from vapor blasting to conventional abrasive blasting. Depending on the application, each technique offers a different set of advantages and disadvantages. However, soda blasting may be the answer if you need to clean or even remove a resistant coating from a substrate that is too delicate to withstand the harm that a typical abrasive blasting procedure would cause.

Soda as a Blast Media

Furthermore, sodium bicarbonate is a one-pass medium, unlike other abrasive media. It is unable to be recycled for further use. Also, soda is a highly brittle substance. When it collides with a surface, the particles burst into many smaller ones.

Sodium bicarbonate, unlike other abrasive media, is a one-pass medium. It is unable to be recycled for further use. Soda is a highly brittle substance. When it collides with a surface, the particles burst into many smaller ones. After that, thin dust is left, which is not applicable for further abrasive blasting.

Applying direct pressure at a lower PSI is preferable when utilizing soda instead of other blast media. Another thing to remember is that soda blasting is not a good option for peening a surface because the pressure and media are not meant for it.

Most surfaces are safe for sodium bicarbonate, which is a crystalline particle. It does not leave residue particles embedded in the surface profile, unlike many other media. Soda is also non-acidic, water-soluble, and environmentally friendly. It has an acidic pH of 8.

If soda is blasting near plants, be careful since the soda bicarbonate can discolor or harm grass and other flora after prolonged exposure.

What is Soda Blasting

Soda blasting is a non-destructive, non-abrasive process for removing coatings and paint from most surfaces, including wood and glass, as well as thin metals. Furthermore, soda is a soft blast medium for delicate substrates when base material removal is not permitted.

Soda blasting does not leave a profile signature on the substrate, although it may leave a slight white coating on the treated surface. Furthermore, soda blasting offers several advantages over traditional abrasive media, including neither deform metal surfaces, alter substrate integrity, or generate heat. It also cleans and deodorizes, making it ideal for mold and smoke/fire damage cleaning.

However, soda blasting is a variant of sandblasting, except baking soda is used instead of sand (or other abrasives like slag). When baking soda junctions with the substrate, it “explodes” into tiny particles, eliminating rust and impurities from the surface.

The soda blasting requires no additional cleanup. It can also use on many surfaces attached to the exact item (such as boats, cars, etc.). Surface rust may neutralize, remove, and prevent from using this product. However, it may not be appropriate to use before using some types of automobile refinishing techniques.

Soda blasting was initially employed in restoring the Statue of Liberty (covered with several layers of paint and coal tar inside while made up of thin copper plates on the outside) in the early 1980s. For a variety of reasons, traditional sandblasting was not a viable option. Because the Statue of Liberty’s inner passages is narrow, ventilation of the dust created by abrasive blasting would have been difficult.

Sodium bicarbonate is the chosen best option as an abrasive medium. As a result, the thin copper veneer prevented damage. Since then, media blasting companies that switched from traditional abrasive blasting to soda blasting have employed soda blasting for several purposes.

The primary benefit of soda blasting is that it is single-use abrasive, and low-cost. Although the game’s name is recycling abrasive, there are a few exceptions for most abrasive blasting applications. One-time-use abrasives are for applications that need large volumes of abrasive, such as ship cleaning.

An average ship requires one million pounds of abrasive, or perhaps a lower quantity for the rear bed of an old truck. Additionally, soda is the principal abrasive for cleaning greasy components since the abrasive does not cycle back through to impact the part after it removes the oil. Because soda is water-soluble, no abrasive stays in key bearing regions.

Another advantage of soda blasting is that you can use it to clean food-grade goods. Baking soda is a non-toxic chemical commonly used in the culinary process. Thus soda blasting is a safe way to blast a product without risking food contamination.

Because soda is so popular these days, manufacturers and merchants provide low-quality soda blast cabinets to make quick cash. They are unaware of the subtleties of soda as an abrasive, as well as its limitations. Soda has essential properties, but it is not a miracle cure.

You may recycle other abrasives such as steel shot, silicon carbide, steel grit, aluminum oxide, ceramic, glass or plastic beads, and garnet but soda cannot. Because soda is so soft, it explodes into small pieces when it collides with the blasted item. Furthermore, it does not harden the cleaned component because it is designed and used at a moderate abrasive velocity.

Today, everyone is offering soda blasting cabinets due to the need for a soluble abrasive like soda. All of these blasting cabinets that are supposed to keep the soda contained will quickly become the most significant disaster you can imagine, complete with failing dust collectors.

The issue is that some retailers sell blast cabinet operators low-cost slag and soda. Often, the operator believes the soda is recyclable. Therefore, the operator will frequently operate the machine at more than 60 psi pressures in a siphon delivery system or 30-35 psi in a direct pressure delivery system. On collision, the abrasive explodes, obliterating visibility and releasing microscopic particles drawn into the system.

The majority of blasting soda formulas have consistent particle sizes of 70 to 270 microns.

Baking soda is less abrasive than other types of blast media. In terms of application, this implies that soda will not profile the surface you are blasting.

Furthermore, blasting with soda is not as harsh as other abrasive blasting methods. When it is necessary to avoid leaving a surface profile or harming the substrate is not an option, sodium bicarbonate is employed as an abrasive medium. 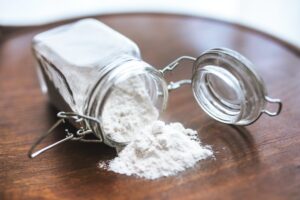 Sodium bicarbonate’s non-abrasive cleaning action makes it suitable for several cleaning operations on a variety of materials. Listed below are some of the practical applications for soda blast media:

Most sandblasting cabinets are set up to media recycle. However, soda bicarbonate is crushed on the first pass, necessitating dust collecting adjustments compared to conventional blast cabinets. Furthermore, most blasting cabinets are programmed to collect useless dust from the blasting operation and recycle the remaining useable media. Because the sodium bicarbonate in soda blasting bursts into dust on impact, the dust collector will rapidly get clogged if no modifications.

To protect exposed skin, use a properly fitted dust mask or respirator, safety glasses, and a safety shield, as well as gloves, long pants, and a long-sleeve shirt.

Inspect the tank for indications of corrosion before each use, and ensure that the rubber hoses are not dry-rotted, cracked, split, or displaying any other symptoms of wear or abrasion from usage or storage.

Before opening the fill cap, ensure the airline is disconnected and that the tank has bled pressure. Also, before connecting the blaster to the air supply, double-check that the deadman valve is closed. Depress the valve lever and release it to see if the deadman valve is working correctly.

Grounding is essential for lowering the risk of static shock and preventing the development of efficiency-robbing static throughout the blast system. Always follow the grounding instructions provided by the device manufacturer.

Like walnut-shell blasting, the usage of sodium bicarbonate is somewhat ecologically friendly. Soda dissolves in water and does not accumulate in soil or residual areas, whereas sand or glass does not.

Tiny quantities of sodium bicarbonate are safe to breathe, while soda blasting uses a breathing device such as a quality gas mask. However, you can hire a professional soda blaster who will wear one.

Soda blasting has a somewhat higher price tag than regular sandblasting. The media, machinery, and labor are all included. Furthermore, soda blasting takes less time and effort to set up. When opposed to sandblasting, it is time-saving since you don’t have to separate easily damaged sections like windows or plastic frames. Also, keep in mind that time is money.

Glass beads, steel shot, and garnet, for example, have a more robust molecular structure and can typically be recycled. The ongoing cost of blast media may be greater than traditional sandblasting because of the high friability of blasting soda (the media disintegrates after the first usage).

Soda Blasting for Your Cleaning Operations

With soda blasting, cleaning oak beams, timber, wood, oak flooring, doors, fences, staircases, automobiles, boat hulls, food processing equipment, masonry, and structural steel are all possible. Furthermore, soda blasting is the answer if you need to clean one or more such objects because they have dirt, rust, graffiti, marks, or other surface damage.

Moreover, soda blasting removes and cleans multi-layered surfaces effectively. There is no need for any other hazardous chemicals, scraping, sanding, or abrasive blasting due to this.

Finally, soda blasting can be an excellent way to remove grease or oil from unclean surfaces. A soda blaster may be used with food-safe materials and can give a range of methods for stripping but not profiling a surface. However, the restricted usage of soda blasting equipment can be a limiting factor in some cases.